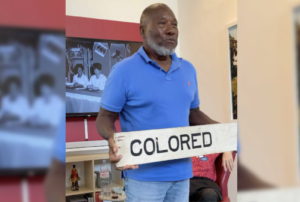 This Black man is not going to stand for Black history being white-washed.

Dr. Marvin Dunn, a professor emeritus at Florida International University in Miami, Florida, has gone against Florida governor Ron DeSantis‘ law prohibiting lessons on race with his “Teach the Truth” tour, where he highlights racism in the state.

According to The Washington Post, Dunn is one of eight plaintiffs in the case against DeSantis’ Stop Wrongs to Our Kids and Employees Act (WOKE).

The professor has been sponsoring his Black history tours through his Miami charity to take students to historic sites, spotlighting Florida’s history with racism.

Dunn has been guiding students on his “Teach the Truth” tour since DeSantis’ push to ban African American studies.

“We’re going to keep on teaching it,” Dunn said, according to The Post. “This is the antidote to the DeSantis-izing of history.”

Dunn has already guided over two-dozen high school students and their families to the museum where civil rights activist couple Harry T. Moore and Harriette V.S. Moore were murdered on Christmas 1951 from a bomb planted underneath their home.

Additionally, he has spotlighted tragedies such as the Newberry Six, where  Rev. Josh J. Baskin and five other Black Floridians were lynched by a white mob in 1916. Dunn’s tour also stops through Rosewood, a town built and populated by Blacks that was set on fire by a White mob in 1923.

“These are things that nobody knew, it’s like it was swept under the rug. I feel very strongly that this history needs to be told,” said Shanika Marshall, who took her teenage son on the “Teach the Truth” tour. “There’s no shame, it just is what it is, but it needs to be put at the forefront so we can all try to get past it.”

DeSantis’ mission is an effort to restrict race-based conversation, analysis, and education.

As previously reported by BLACK ENTERPRISE, presidents of Florida’s state college system recently confirmed they would not be providing funds for programs that bring attention to beliefs on Critical Race Theory.

Dunn plans to take another group of students on his “Teach the Truth” tour during the upcoming legislative session in the spring.