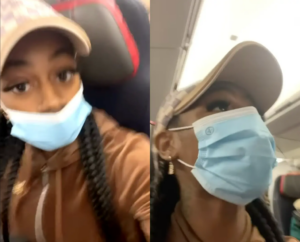 Olympic hopeful, Sha’Carri Richardson was ejected from an American Airlines plane after getting into an argument with a male flight attendant who she refers to as “John” in an Instagram video. NBC News reports Richardson was told, “The captain wants you off the plane,” when the disagreement broke over the track star using her phone.

The athlete shared in the video that she was on “vacation time,” when the flight attendant walked into the camera’s view. The attendant, according to Richardson became “disrespectful.” Richardson said, “So do they know this man hands is all up in my face and he was very disrespectful and I felt threatened?” when she was asked to leave the aircraft. The sprinter also asked if the flight attendant would also be removed from the plane, and alleged, “I’m pretty serious the disrespect I received would not have happened if I was a one of them.”

“Prior to the video this gentleman asked me to get off a cell phone call, [and] I did.” She continued, “I stated to him I didn’t like the tone he used with me. Following that while standing in front of me doing the safety protocols he continued to lean over to look at my phone. He asked to see that my phones were in airplane more at this point. He demanded that [I] show him. Which I did in front of him.”

Richardson may be considering legal actions, and the caption for the video on Instagram reads, “Tell me if I’ll be wrong to pursue legal actions against the airline @americanair not only did the man threaten me but also an innocent bystander who simply just wanted a picture with me.” According to Richardson’s post, she feels the captain of the plane was not “doing anything to help the situation and this flight attendant has the applause when I exited the plane.”

Fellow passengers on the flight gave their two cents on the ordeal. Richardson responded, “Oh so you’re worried about a connection while a grown man is disrespecting me?” to a passenger who accused her of being the reason he missed his connecting flight. The passenger retorted, “I don’t give a s***,” according to Daily Mail.

Richardson’s representative told NBC News that she “has nothing to add at this time.”

BLACK ENTERPRISE also reported this came after news of Richardson testing positive for THC, the chemical found in marijuana, in July 2021 when she was suspended from Team USA just ahead of the kickoff for the Tokyo Olympics.