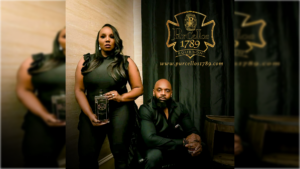 Socialites Tomeka and hubbie Herbert Purcell wanted to break into the Bourbon space but the odds were against them since only 1% of Bourbon brands in the country are owned by African Americans.

“We want to reimagine the Bourbon experience, but it was a bit intimidating. Bourbon is a sexy, luxurious cocktail and creating such a masterpiece was definitely a labor of love for my husband and I.” says Tomeka.

Enter PurCellos1789, an American straight bourbon, with its signature small batch owing its distinctive warm spice and subtle flavors to being aged for 30 months in 30-gallon new charred American white oak barrels, resulting in the smooth taste of 1789.

Bottling their own bourbon and distilled in Colorado Springs, Colorado, Herbert says, “Keeping flavors locked in, good bourbon never goes out of style; but in a growing market, PurCellos1789 was created for the reason many great brands are – to fill a need in the marketplace. We wanted to create a brand where couples can enjoy together.”

So what better way to hold a glass up than on Valentine’s Day? PurCellos1789 large (750 ml) bottle retails for only $65, making high quality bourbon accessible to enthusiasts, especially couples who want a rich, smooth cocktail together at dinner.

Named after her hometown, Winston Salem, NC founded in 1789, founder Tomeka Lynch Purcell saw something lacking in the bourbon marketplace. “I created this brand for, frankly, women like me,” she explains. “It’s for a woman that wants something that isn’t harsh and might even want to enjoy a cigar along with it. I wanted a grown up, sexy and smooth taste and couldn’t find it. So, I created my own.”

Of course, PurCellos1789 isn’t just for women. Strong at 90 proof but still smooth, PurCellos1789 has the fullness that bourbon drinkers love – and although Blacks are underrepresented in this market, these couplepreneurs are blazing a path as the first Black-owned bourbon distillers in CO.

Distilled and bottled in Colorado Springs, PurCellos1789 is available at https://purcellos1789.com.