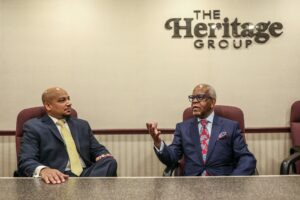 Harris, a vegan and yogi who spent his youth in the Russell Woods section of Detroit, has become an active player to advance Black businesses.

Before becoming president and CEO of the NBL, Harris created the International Detroit Black Expo, which quickly became one of the largest showcases for Black businesses in the U.S. The NBL reports having more than 120,000 members nationwide and 125 Fortune 500 corporate partners. The membership includes chapters in all 50 states, along with international branches.

Harris believes that the road to wealth for Black entrepreneurs and businesses begins with health and self-care.

“It’s holistic entrepreneurship; there can be no wealth without health—mind, body, soul, and spirit,” Harris told the Detroit Free Press. “I make a concerted effort to prioritize self-care, just as the pursuit of Black economic freedom is my life’s purpose, design, and contribution during this lifetime and probably the next. It all ties in together as a lifestyle, channeling balance and alignment of the right frequency, positive energy, and high vibrational activity daily, which is a part of ancient African traditions.”

According to Harris, 80% of the 62,000 businesses in Detroit are Black-owned, but most of those businesses have just one Black employee, the owner.

“We should be viewing those businesses as untapped potential for growth because if those businesses were to add one, two, three, or four more people, we could quadruple our economy. It’s simple math,” Harris told the Free Press.

The increase in Black businesses can largely be attributed to the COVID-19 pandemic and the government’s relief programs, which provided Black Americans with an opportunity to change their lives and restart their careers.

Black Americans nationwide decided to take their employment and financial futures into their own hands and started their own business. An L.A. Times report states on average, 380 out of every 100,000 Black adults became new entrepreneurs during the 2020 pandemic.

Simultaneously, Harris and the National Business League generated more than $20 million to help rebuild, fund, and innovate Black businesses nationally and in Detroit.

Additionally, the Black Lives Matter movement of 2020 brought significant awareness to racial equity, and as a result, Black businesses, big and small, thrived.