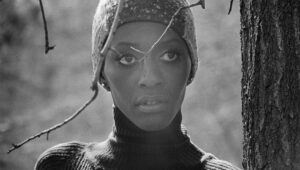 Invisible Beauty is the story of Bethann Hardison, a fashion revolutionary who has been on the front lines of racial justice in her industry for over five decades. Through her life journey as a pioneering Black model, modeling agent and activist, the film explores race, beauty and representation.

Directing in tandem with Frédéric Tcheng (Halston, Dior and I), Hardison is a force at the helm of her own story. Together, they trace Hardison’s impact on fashion from runway shows in the 1970s to roundtables about the lack of racial diversity in the early 2000s. Candid and audacious, Invisible Beauty is an absorbing record of the racial evolution of fashion and an original contemplation on the life of a radical thinker.

Hardison embodied the ethos “Black is beautiful” long before the fashion industry acknowledged this truth. As a model, she walked the runway alongside Iman. As an agent, she discovered people such as Tyson Beckford and mentored supermodels like Naomi Campbell.

Hardison was one of BLACK ENTERPRISE’S 2011 Women of Power Legacy honorees.