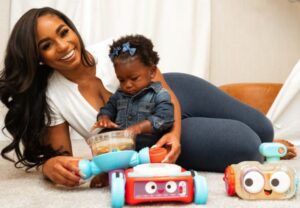 When Jalisa Vaughn-Jefferson revealed she was quitting her full-time corporate job to become a lifestyle influencer, her parents didn’t know what to think.

“My parents lost it,” says Vaughn-Jefferson during an exclusive interview with BLACK ENTERPRISE. “They were like…how will you pay for health insurance? What are you going to be doing? You’re going to be taking pictures?”

Vaughn-Jefferson told her parents to trust her, and they did. Now, her parents are applauding her work as a lifestyle influencer. She has more than 293,000 Instagram followers.

“Of course, there was a bit of fear present,” says Vaughn-Jefferson. “I contemplated it over and over. But I could just feel it. I could feel how my entire body felt different when I was doing the influencing and blogging. I loved engaging and connecting with my audience. Creating content is something I truly enjoy. So I knew this was what I was supposed to do.”

“Mood when wake up and realize you hit your $1M brand deal goal and still have Q4 to go,” Vaughn-Jefferson wrote. “God, I Thank YOU.”

Vaughn-Jefferson shows the power of being clear about what you want and having the confidence to walk towards it. Last year, she tweeted her million-dollar goals and she’s already achieved them.

“A mill in brand deals next year,” Vaughn-Jefferson wrote. “Mark my words and remember this tweet”

A mill in brand deals next year. Mark my words and remember this tweet 👆🏾

Vaughn-Jefferson attributes her success to her team and her authentic presence on social media.

“Unlike a lot of influencers, I want to hire a team so that I can move faster,” says Vaughn-Jefferson. “I didn’t want to spend all my time trying to sit down and learn every trade of this business. And I really believe that’s kind of what helped me move a lot quicker. I was always open to having a team.”

Vaughn-Jefferson has taken her audience on her journey to getting married, buying a home, and having a baby. By sharing her special moments, she’s been able to land deals and partnerships with over 20 top brands. Walmart, Carters, Cascade, Arm & Hammer, Reebok, and Zales Jewelers are just a few of the brands that Vaughn-Jefferson has worked with this year.

“I got noticed by these brands because I was doing the job before doing the actual job,” says Vaughn-Jefferson. “Before just waking up and deciding I wanted to start working with brands, I was sharing the products that I use and love every day without being paid. The brands I’ve worked with have been watching me for years. They reach out because they see how consistent I am. They love how I interact with my audience and get things done.”

Vaughn-Jefferson and her team celebrated her milestone this weekend.

“Last night my tribe (forced) me to celebrate a huge milestone,” Vaughn-Jefferson wrote. “Imposter syndrome told me to cancel it because “Who am I?” but they said no way & I couldn’t be more grateful for them speaking life & consistently reminding me of who I am & what God has called me to do.”

She added, “Cheers to this mill & millions more FOR ALL OF US.”