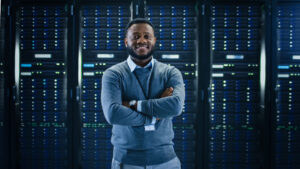 A nonprofit that helps diverse founders is teaming with its partner companies to help mostly Black tech businesses gain $5.3 million in funding.

For the third time since August 2020, $5 million will come from the Google for Startups Black Founders Fund that is uniting with Goodie Nation. Fifty Black startups this year received $100,000 unconditionally. Efforts from the Atlanta-based Goodie Nation helped Black founders obtain capital.

Plus, Goodie Nation connected with personal computer maker Lonovo to award 30 diverse-owned small businesses in the U.S. and Canada $10,000 each. The awards, mainly for Black founders, are expected to be issued by January.

The new awards are a big deal as observers contend such funding to Black-owned startups typically comes directly from large global brands not from independent nonprofits.

Goodie Nation Founder and CEO Joey Womack shared with BLACK ENTERPRISE some details about his nonprofit, its growth plans, as well as provided access to some fresh cohorts that gained founding.

“Goodie Nation is continuing our commitment to support diverse founders and specifically, Black company founders and leaders, in our efforts to close the relationship gap that often exists for minority and women entrepreneurs for gaining access to capital, mentorship, sales acceleration and community.”

For Hassan Riggs, the founder of Smart Alto of Birmingham, AL, the $100,000 award will help his artificial intelligence firm hire another data scientist and buy more data to support its machine learning model that predicts which homeowners will most likely move within the next six months.

In an email, Riggs wrote, “Google and Goodie Nation support overlooked and underrepresented founders tackling big problems with innovative ideas. I’m proud to be included in this cohort of Black founders making an impact, investing in their community, and solving problems that make the world a better place.”

The funding will too help make a difference for Buoy Pricing Inc., a Chicago-based revenue management platform that automatically prices and reports on vacation rentals.

Co-founder, Candice Speicher, wrote via email that this award means everything to Buoy. She and her husband, Tim Speicher, built their company together.

She says, “getting backed by Google and Goodie Nation helps validate our technology, amplifies our mission, and it gives us the community to help Buoy succeed.”

“With this award, we can now build the connections to reach more businesses and aid their growth! We are finally able to automate Buoy’s onboarding process, which strengthens our technology—something we couldn’t have done without this support.”

After launching in 2014, Womack says Goodie Nation now has 500 founders. But he is confident new partnerships with larger firms will boost that number. By late 2023, he projects Goodie Nation will have 750 founders, 350 investors, 200 coaches, and 50 large companies as funders and partners.

All told, Womack says his firms have gained about $20.8 million in funding over the last 2.5 years. He says roughly 75% of that has gone to Black-owned companies, with awards ranging from $10,000 to $100,000. He says Goodie Nation has placed $35 million in founders’ hands, along with making connections for Black companies to funders and funding opportunities. He says 85% of that money has gone to Black founders.

To help sustain its growth, Goodie Nation on Oct. 18 will conduct its first ever-in-person, “Intentionally Good Summit, Volume One.” Powered by Verizon, the exclusive event will be geared to founders, coaches, investors, partners, and team members that make up Goodie Nation.

“It will help us launch a few new projects such as connecting Black-led startups to large companies for paid pilots; fellowships for recent college graduates; and community building in several key cities.”

As for Black founders, Womack says Goodie Nation is generally looking for firms with at least $5,000 in monthly revenue that have at least $150,000 in capital. Check out more information about the nonprofit including a more extensive list of its funders here.