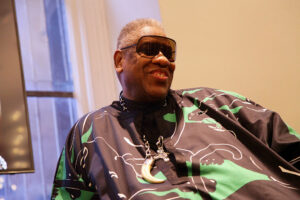 The former judge and fashion icon on the hit CW television show America’s Next Top Model will have items featured in a world-leading auction.

Design and art pieces from the estate of the former creative director of Vogue, André Leon Talley, who died at age 73 in 2021, have been added to the auction catalog at Christie’s, the renowned auction house.

Items in the 400-lot set for the auction include wardrobe trunks, robes, and sunglasses from designer labels like Prada, Gucci, and Louis Vuitton.

Christie’s will auction three silkscreen prints by Andy Warhol, each priced between $15,000 and $20,000. One of the featured prints portrays Diana Vreeland, Talley’s mentor and the former Costume Institute director at the Metropolitan Museum of Art.

In another photograph up for auction attributed to former Interview editor Bob Collacello, Talley is seen in his younger years seated with Warhol and Bianca Jagger at her 1981 birthday dinner.

Reportedly, the items in the lot are expected to accumulate $1 million. Proceeds from the auction will go toward two historically Black churches.

Additionally, a group of items from the Talley collection will be distributed to the Savannah College of Art and Design, where Talley was a board member.

As previously reported by BLACK ENTERPRISE, Talley, who was known for breaking ground in the fashion industry, died after being hospitalized from a battle with an unknown illness.

Talley was a prominent figure at Vogue starting in 1983 as the magazine’s fashion news director before being promoted to creative director and editor-in-chief Anna Wintour‘s right-hand. He also worked for W Magazine, appeared as a fashion correspondent for Entertainment Tonight, and covered red carpet events for ABC.