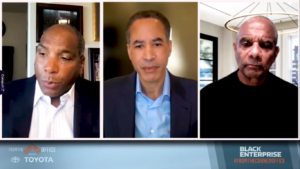 Black Enterprise CEO Earl ‘Butch’ Graves Jr. discussed the fight for voting access for Black voters and corporate America as part of his From The Corner Office series hosted by Toyota.

Joining him Tuesday in a virtual discussion were Black business executives Charles Phillips and Kenneth Chenault. All three men were part of an effort by more than 70 Black executives who signed a letter calling on corporate America to fight a wave of voting-rights bills similar to the one recently passed in Georgia, which they say will make it harder for Black people to vote.

Chenault, who previously served as the CEO and chairman of American Express from 2001 until 2018, discussed how the effort came together.

“We recognized that the law that was passed in Georgia was not just an issue in Georgia, but an issue in 46 states and as Black Americans, we needed to do something that has never been done before and that is, have Black men and women in the corporate sector stand up and speak out,” Chenault said.

Chenault along with Phillips, the former CEO of Infor, Bill Lewis, Ken Frazier, and others knew they needed to do something and eventually came up with the idea to place an ad in The New York Times and The Washington Post.

“The reality is the vote for Black Americans was not something that was a birthright, many people died for the right to vote,” Chenault said. What we want is for corporate America to take a position on a basic fundamental right, which strikes at the heart of democracy and that is the right to vote.”

The group also discussed how the effort to suppress the Black vote is happening even in Democratic states and how it came together so fast. Phillips, who spent more than a decade on the board of directors for ViacomCBS, told Graves the laws and how fast they were pushed after the election pointed to one thing.

“People who are used to having control see the demographics changing,” Phillips said. “They didn’t expect Trump to lose, or at least were hoping he didn’t and have decided to change the rules. Not every state is gonna pass the law but there’s certainly a Republican pocket in every state that’s going to try to change the rules.”

Phillips added that Republicans are well financed and animated, which is why the group pushed to do something right away. The group also emphasized that they are not partisan and the issue is not about who you vote for but your right to vote.

The group also discussed what they can do to hold corporate America accountable, the diversity pledges that corporations made last summer but may not have a plan to fulfill them, and why it is so hard for corporate America to understand what Black Americans want. The full video can be seen below.